While the train sped by the Brahmaputra river bridge; rubbing my sleepy eyes; I peeked out of my window pane to soothe myself in the misty dawn light, crumbling myself in a form of a shell and wrapping the thick warm shawl, I stepped out of the train to feel the intensity of the sunrise. Apart from being a chaser of Sunrises and Sunsets, this time it was more to swig the suppressed theory hidden in this culturally rich town of Kamakhya in the North-Eastern state of Assam!

Mythology & Tantra being some of my precious preferences based on Indianology, reflecting India’s typical offbeat locations & referring to the Indians; religion being an ultra-sensitive concept, a person following the footsteps of hidden pilgrimages is highly appreciated! My culturally inquisitive persona and an ardent desire to go mythologically unexplored took me across the river Brahmaputra and perched me in a small yet mythologically rich town called Kamakhya, Assam.

Referring back to the Mythology-

The temple of Kamakhya has a very interesting story of its origin. It is one of the 108 Shakti peeths (Abode of the Goddesses). The story of the Shakti peeths goes like this; once Sati fought with her husband Shiva to attend her father’s great yajna (A Hindu ceremonial ritual) Despite her husband Lord Shiva’s disapproval, Sati had gone to attend the universal ‘yagna’ organized by her father Daksha. Shiva was not invited and was also abused by Daksha. Unable to bear the insult, Sati committed suicide. When Shiva came to know that his beloved wife had committed suicide, he went insane with rage. He placed Sati’s dead body on his shoulders and did the tandav or dance of destruction. To calm him down, Vishnu (Another Hindu deity) cut the dead body with his chakra (a weapon). The 108 places where Sati’s body parts fell are called Shakti peeths. Kamakhya temple is special because Sati’s womb and vagina fell here.

Driving across the windy roads to the hilltop temple of Goddess Kamakhya you will also come across the loud jingles of the temple bells and a scenic view by the ghats! The temple then welcomes you with an aura of suspicion and curiosity only to help you explore the location intensely. The temple premises is usually crowded with devotees and saints and one will have to queue up to enter the main temple. The main temple interior is marked by a cave-like inner structure with deep and dark pathways, embedded statues of the other deities and lined up raw heads of animal sacrifices. The most internal cave-way will lead you to the ‘Yoni’ (female genital) which is to be worshipped (the symbolic organ that remains covered with a red cloth).

1.The practice of Animal Sacrifice:

Domestic animals and birds like Goats, Buffaloes, Ducks, and Pigeons flood the temple premises to queue up for their row of sacrifices. Lack of proper evidence about this on behalf of the mythologists or the historians have however failed to stop this practice.

As mentioned in the ancient scriptures: A form of Tantric (an ancient philosophy) magic wherein the Sadhus have the high potent spiritual power to apply it to humans through the spirits (as their messenger) and hypnotize them to be their slaves or to harm another being. Though it’s scary enough to believe, yes! it does exist.

The Ambubachi Mela is a yearly Hindu fair held at Kamakhya Temple, Assam. This yearly fair is celebrated during the rainy season. The cause of the celebration is to denote the yearly menstruation period of goddess Kamakhya. It is believed that the presiding goddess of the temple, Goddess Kamakhya, goes through her yearly cycle of menstruation during this time stretch.There is no such idol of the presiding deity but she is worshipped in the form of a female genital.The temple remains closed for three days during the fair.   After three days Goddess Kamakhya is bathed and other rituals are carried on to ensure that the Goddess retrieves her purity. Then the temple is reopened and Prasad is distributed. On the fourth day, the devotees are allowed to enter the temple and worship Goddess Kamakhya. The prasad is distributed in two forms – Angodak and Angabastra. Angodak refers to the fluid part of the body and Angabastra refers to the cloth covering the body – a piece of the red cloth used to cover the female genital during the menstrual cycle.

What secrets have you unveiled in Assam or other parts of North-East India?

Roadtrip to a long lost temple town of Bishnupur 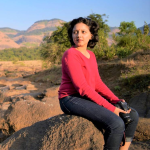